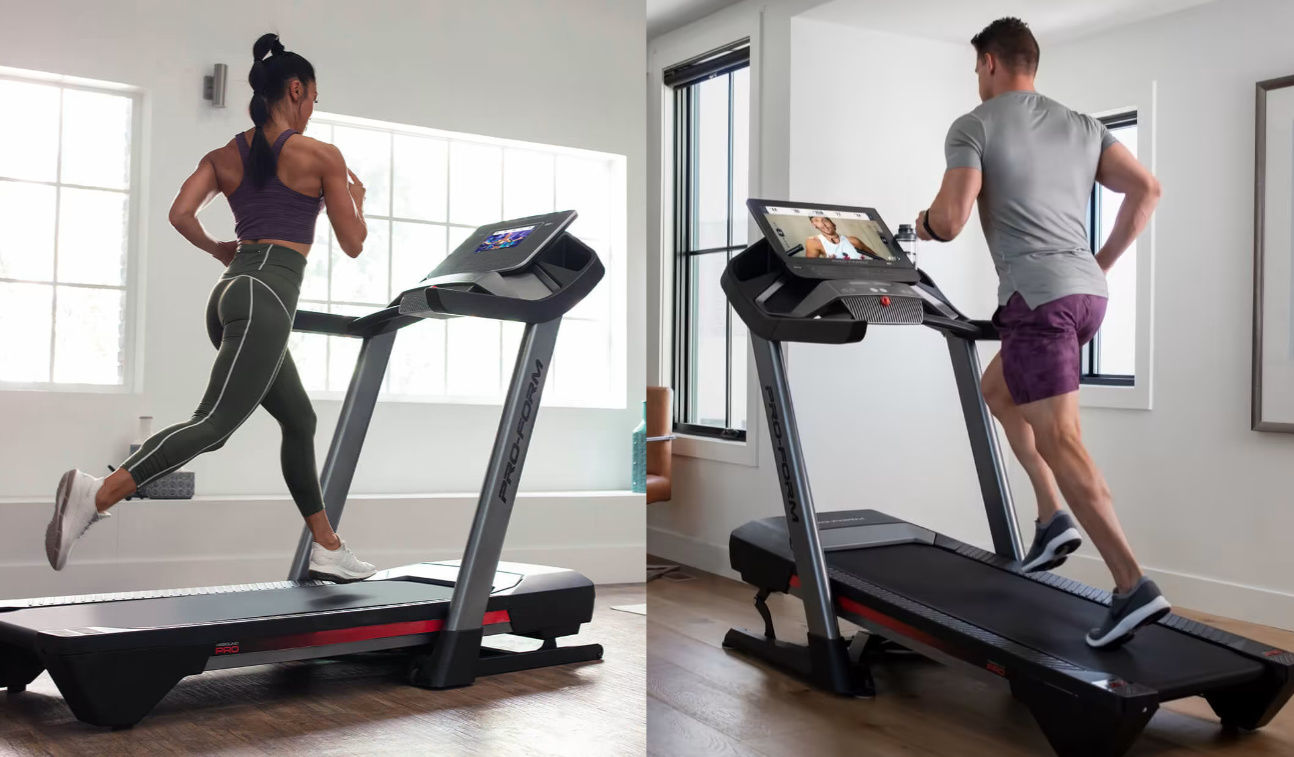 One of the most important pieces of equipment for any home gym, shopping for the right treadmill can be a stressful experience. They can be expensive and there’s a lot of conflicting information out there on each model. So to better help you make your decision, today we’ll be comparing the Proform Pro 2000 vs 9000. The brands two most popular selling models. Breaking down the specs, key differences, photos, and more. Hopefully giving you a better insight on the right options for you.

Aside from the motor and screen size, these are the same two treadmills. But here is the quick comparison.

Both treadmills have the same speed and incline limits. 0 – 12 mph may speed and 0 – 12% incline options.

The tread running space on both models is the same size. At 60 inches by 20 inches.

With both decks folding for storage. And offering easy fold technology.

There are a lot of great reasons to look at ProForm treadmills. Owned by iFIT Health & Fitness, they are the same brand that makes NordicTrack. And are available at a wide variety of retailers across the US. The Pro Series is their upper tier of treadmills, but come loaded with a ton of features. So it’s easy to understand why you would be interested in comparing the ProForm Pro 2000 vs 9000. Below I’ll break down each treadmill in more detail and compare how they performed.

My first impression of the ProFrom Pro 2000 was that it is a great sized home treadmill. It looks very stable without being too big and bulky. I think not not adding crossbar ads to the aesthetic gives it a bit more negative space. Getting on and starting the treadmill is a breeze. The console features large stop and start buttons, along with speed and incline  / decline adjustments. There are plenty of built in options for pre sets etc (more on this later), but the fact you can get going and running quickly is always a plus for me.

Getting running on the Pro 2000 was easy, but how did it perform? A couple things about the treadmill that I really liked included the ability to run a -3% decline. Which for the price of the treadmill, is a great feature. The motor felt strong when running at a fast pace on an incline. And for me, the 10 inch screen was fine. But I wasn’t testing it with iFit classes. So I could see the size being a drawback if that’s something you’re looking for. The deck was decent. It gives enough cushion but if you’re looking for that running on a cloud feeling. This isn’t it.

Overall I really like the ProForm Pro 2000. I think what stands out most is that decline option. There are other treadmills with similar features in the price range. But not with decline running.

It was a week or so between getting to test the ProForm Pro 9000 after the Pro2000. But seeing it was like looking in a mirror. The two treadmills are built off the same base. So they are the same size and almost exactly the same weight. Making it the perfect size for most homes just like the 2000. The one major difference is the large and eye-catching 22 inch hd touch screen on the Pro 9000. Which just takes the wow factor up a notch. And definitely looks like a higher end treadmill overall because of this.

Getting running on the ProForm Pro 9000 is as easy as hitting start. And I’m thankful they kept all the physical buttons and didn’t run everything from the HD display. Which helps a lot with any learning curve. The console layout is in line with most treadmills, and above that the HD screen beams beautifully. Providing all the stats and feedback you could want. And is perfect for running your iFit classes.

Another upgrade on the Pro 9000 is the stronger, 3.6 chp motor. The added power pulls wonderfully at full incline. And this model also has a decline running option to -3%. One of my favorite features on the ProForm Pro series.

Below is a side by side image comparison of the ProForm Pro 2000 vs 9000. Including console and folded views.

There are a lot of great reasons to be looking at ProForm Pro 2000 vs 9000. The Pro series is the brand’s top of the line treadmills. And both offer a ton of high end features packed into the perfect size for home use. But which one is right for you? DO you need the extra features of the 9000 or is the base 2000 the better choice?

For me this choice really comes down to one question, are you going to be using the iFit integration on the treadmill? If you are, then the ProForm Pro 9000 is probably the better choice. The larger screen just makes for a more immersive experience and more high end experience.

That said, if you are looking for more straight forward treadmill use, the ProForm Pro 2000 offers almost all the same main features. And performs almost identically to the higher end model. Aside from the screen side for live class use.