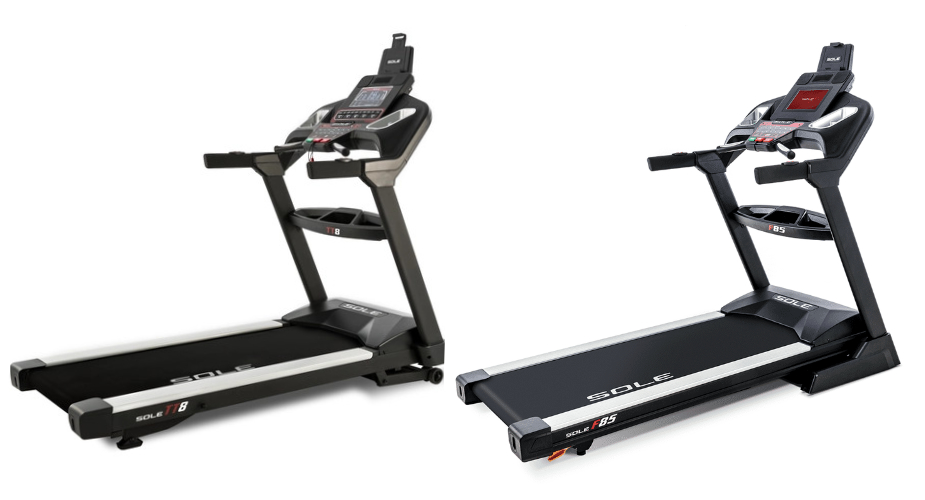 Sole has become a major player in the treadmill industry over the past decade. Offering some of the best reviewed models and one of the industry’s best warranties. They have become one of the more trusted budget friendly brands. And recently they have started releasing some higher end models. And today we’ll be comparing two of the brand’s higher end units, the Sole TT8 vs F85.

Both treadmill models have the same:

How they are different:

It’s easy to understand why you would be looking at the Sole TT8 vs F85. Both units are built very similarly. Sharing a bevy of features as outlined in the quick comparison above. The two biggest differences between the two being the decline running on the TT8 and the Android screen on the F85. But how does the technology perform and is the decline running option really worth it? Let’s find out!

With a 22” x 60” running area, the Sole TT8 is noticeably larger than their smaller treadmills. But shares the same frame as the F85. The console on the TT8 is a 10.1 TFT LCD. Though it’s not a touch screen and can’t mirror  your android device like other Sole models. Although there is a tablet stand available just above the main console. The treadmill also features sidebar controls for easy adjustment while running.

Running on the Sole TT8, the deck feels cushioned but still firm enough not to feel squishy. And the 4hp motor has plenty of power. Even when pushing at a higher incline. And with a 400lb weight capacity, this treadmill should be great for runners of all sizes. Where the TT8 really shines is the downhill running. With a 6% decline, it’s one of the highest available in the at home market. And does a great job in allowing the true rolling hill experience while running.

As mentioned above, the Sole F85 shares the same frame and overall design of the TT8. So you can expect the same wide 22” x 60” running area. Roomy for a home treadmill. For a center console Sole has upgraded the newer F85 with a 10.1” touch screen that comes with Android. This means you can cast your phone or tablet to your treadmill’s screen. An awesome feature. That said, the technology is new and has some issues requiring restarting.

The F85 also shares the same deck. Minus the ability to run at a decline. The 4hp motor is as strong as you could want. Feeling powerful when pushing sprints at an incline. And is more than capable of handling the 400lb weight capacity. Overall the treadmill just feels sturdy and built to last. And knowing it has the great Sole warranty is always a plus.

Below are images of both models displays and videos of the Sole TT8 vs F85 treadmills.

With the amount the two treadmills have in common, it’s easy to understand why so many people end up looking at the Sole TT8 vs F85. They both offer a string 4hp motor, plenty of running space,  and feature the same great warranty covering lifetime on the frame, motor and deck warranty. 5 years on electronics and parts. And 2 years labor. One of the best in the industry. But which should you buy?

For me this really comes down to one question, is the decline worth the extra price? If I have the money I’m hands down going with the TT8 and the 6 levels of decline running. While the screen is not as advanced as the F85. It’s a trusted bug free technology and I can always use my tablet or have a tv in front of my treadmill.

That said, if my budget is set at a certain price. I’m probably not going over my budget for the TT8. For the price, the F85 is a great treadmill.