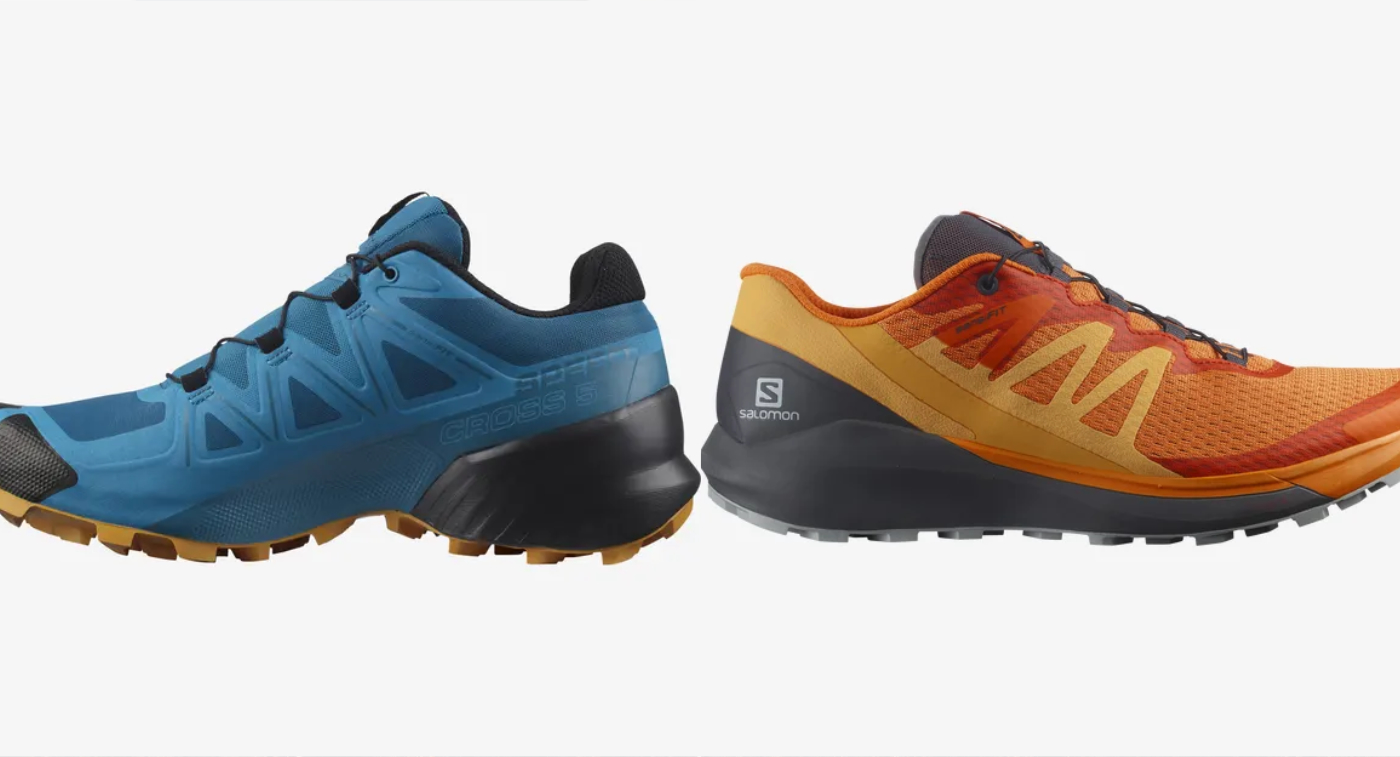 It’s been a while since I’ve reviewed a pair of Salomon trail running shoes. And today we have two pairs, comparing two of the brand’s more popular trail shoes in the Salomon Speedcross vs Sense Ride. One is the brand’s aggressive trail runner designed to take a beating in the wettest and muddy conditions. While the other is a lighter trail shoe, designed for less aggressive trails and mixed condition running. But which one is right for your needs? Below we’ll review the key differences, specs, images, and in depth review for each. So get ready to lace up and let’s get to it! Founded in the French Alps in 1947, Salomon is one of the most recognizable brands in trail running. Producing a wide range of products including running shoes, trekking poles, and running vests. And today we’ll be looking at two of the brands top selling trail running shoes in the Salomon Speedcross vs Sense Ride. Which on paper are very similar. But it’s the small differences that give these two models a different feeling when on the trail. So which one is right for you? Let’s find out.

It’s been a long time since I’ve tried the Salomon Speedcross (version 1) so I was excited to give the new 5’s a go. Out of the box the Speedcross have an incredibly aggressive look for a trail runner. Complete with 5 mm lugs and added foot protection for tougher trails. It’s clear that Salomon has built this model with the intention of hitting the trail in any weather or conditions. This is a bit different from other running shoe brands that have gone to more cushioned and comfortable looking trail shoes. So how do they feel on the feet?

When first trying on the Speedcross, there were a couple of things that stood out right away. First was the size of the toe box. It’s large and roomy. In fact I would say that overall the entire shoe runs large. So for me, I wouldn’t recommend going up in size unless you have really wide feet. Next was the lack of ankle support and padding. For the stack + lug height, the shoes are tall. This lack of ankle support can lead to some lateral roll while running or making cuts on the trails.

Overall I enjoyed running in the Speedcross. The grip may be some of the best I’ve ever tried in trail shoes. And I had no problem staying locked in while running. Even over wet rocks and mud. On the downside I’d say that overall the sizing is a bit sloppy and loose. I think adding back in some ankle support would help a lot. Lastly, I tested them for 50 miles and the soles already showed a significant amount of wear. I do question if I would get my typical 250-300 miles out of these.

This would be my first time testing out the Salomon Sense Ride. And out of the box I have to admit, they are a good looking trail running shoe. With a 4 mm lug and light foot protection around the shoe. They have an aggressive look without feeling too much like they were designed for a muddy trail run. The Sense Ride are also noticeably lighter in weight than the Speedcross. Something that is noticeable as soon as you pull them out of the box and especially when you put them on.

On the feet the Salomon Sense Ride feels comfortable in width without feeling wide. And the upper build fits well without feeling tight. For cushion the Sense Ride offers a medium amount of firm cushion. Enough to take a lot of the shock from trail running, without feeling like you have pillows under your feet. I was also a fan of the toe protection on the shoe. Which was better than I expected at taking on minor impacts.

My only issues with the shoe were that they could feel a little loose when running fast down hill. The upper gives a bit which I think is the cause. And overall they really feel better suited for softer mock well maintained trails. And I probably wouldn’t wear these on a more technical mountain trail. The other thing, and while I didn’t experience it. When doing research I found more than a few people mention their shoes making a crackling noise after breaking in. Again, I didn’t notice it. But enough people mentioned it to make note.

In the imaged below we’ll compare both the Salomon Speedcross vs Sense Ride side by side. Showing the top, sides and soles.. From above, you can see the similarity in the two shoes based on the “standard” heal foot shape. But the Sense Ride had a bit wider toe box. The two sole designs are a bit different. The Speedcross has more spacing with larger multi direction lugs. Compared with similar stats, there’s a good reason that a lot of runners end up researching the Salomon Speedcross vs Sense Ride. But the truth is that these shoes are designed with different purposes. With each having things to really like. Along with areas they don’t perform as well.

The Speedcross is a true mudder, designed to grip on the toughest trail. They feature an aggressive lug size and are on the heavier side. But if you need to get through a steep, slick trail. Then they have you covered. While the Sense Ride provides a more of a running shoe feel. With slightly less lug size and overall weight. They perform great on well groomed trails. But not as well on steep slick slopes.

Which trail running shoe to buy?

Both are great shoes for their intended purpose. And which shoe is the better choice really depends on what you’re buying them for. If you are hiking or running, sleep and aggressive trails. Or signing up for an OCR race. Then you should probably look at the Speedcross. But if you’re looking for a more “trail running” shoe. Something that will perform better on well groomed and pact trails. Then the Sense Ride would be the better choice.

So depending on your needs. One of these shoes has probably got you covered. If you have any questions, let me know in the comments below!