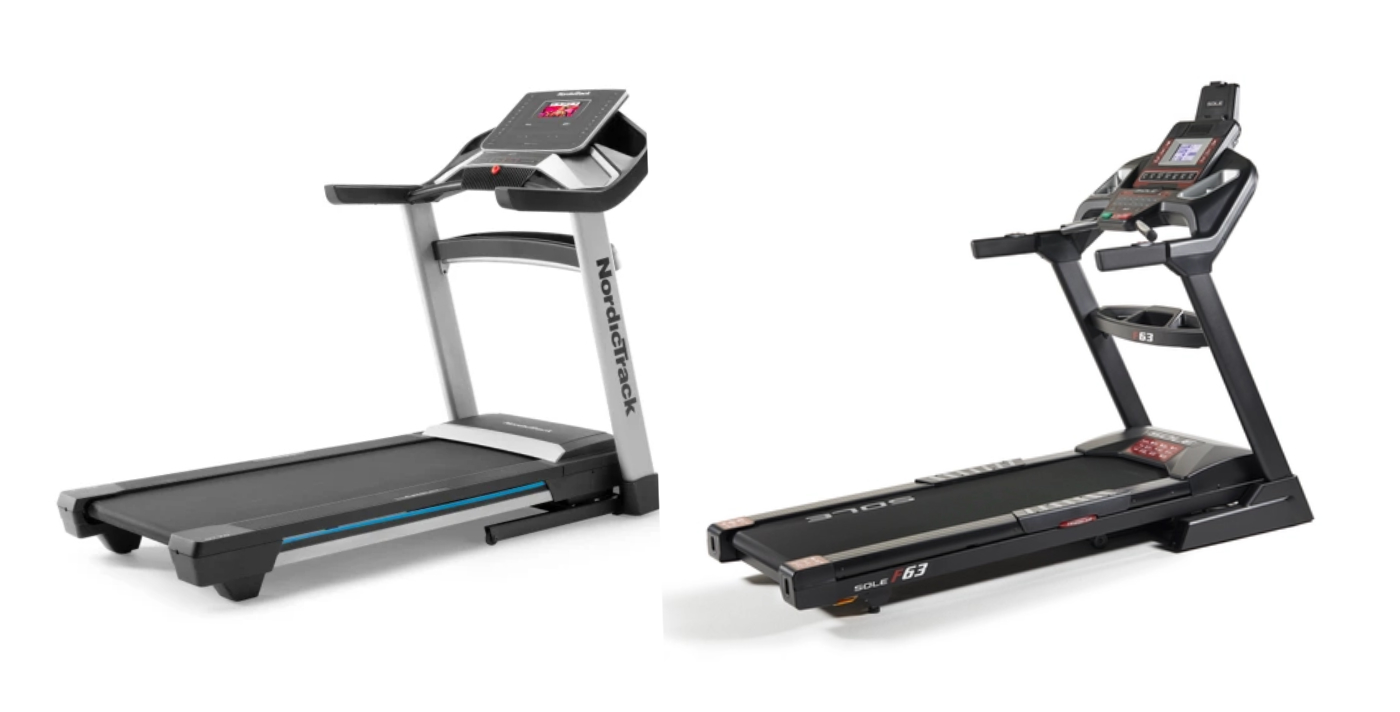 NordicTrack is one of the oldest and most recognizable names in home fitness. And when it comes to treadmills, they offer a wide range of models and features. While Sole Fitness has built a solid reputation for quality at an affordable price. Including one of the best warranties in the industry on their treadmills. So today we’ll be reviewing two of the brand’s intro models, comparing the NordicTrack EXP 7i vs Sole f63. At a similar price point. Both provide a lot of features for not a lot of money. So which one is right for you? Below we’ll break down the differences, advantages, and disadvantages.

Nordictrack EXP 7i vs Sole f63

NordicTrack is undoubtedly one of the most popular brands in treadmills. They have a reputation for producing higher end units. Providing the latest and greatest technology. But how does their intro level model compare to Sole. A brand that is known for value. Giving you the features you need, in a quality build, for an affordable price. Let’s get to the NordicTrack EXP 7i vs Sole f63 in depth reviews.

The NordicTrack Exp 7i is the brand’s introductory model, coming in at right around $1,000. Which is an affordable entry point for a brand that isn’t always known for being affordable. And for the price the Exp 7i packs a punch. With a large 20” x 60” running area it’s bigger than you might expect. And the control console layout is very user friendly. With the added benefit of having the small 7” touch screen.

With the Exp 7i you also get the option to use NordicTrack’s fitness app, iFit. This means the app can actually control the incline and speed of your treadmill. A very popular feature. But you can also use the treadmill without the app. Running on the treadmill, the belt and deck is soft with just enough firmness. I’m a fan of NordicTrack decks. This model tops out with a max speed of 12mph. Which is understandable for only having a 3hp motor. Typically the minimum you want for a treadmill.

The 7i also has a max 12 degree incline and the motor handles it well. Although if you are heavier (250lb+) and looking to run you may want to look at other models. I also wish there was a place to put my tablet. Simply standing on top would have been great. That said, and for the price, I’m a big fan of this treadmill.

The first thing I noticed about the Sole f63 is the size. Even compared to the NordicTrack, the F63 is almost 6 inches longer. Though the two treadmills both offer the same 20” x 60” running area. Standing on the treadmillI had plenty of room to spread out. And I really like that they have a tablet/book holder on top. While not as aesthetically pleasing, functionally it’s a huge plus. The console on the Sole is a black and white display. But what it lacks on color hd, it makes up for in simple to use function.

Once running, the Sole f63 feels sturdy. The extra length provides just a bit more stability especially at higher speeds on an incline. On the feet the deck and belt feel good but don’t dampen the impact as much as the NordicTrack. But overall I wouldn’t notice if I wasn’t comparing the two directly. Where the Sole really excels is in its speed and incline. With a max of 12 mph and 15 degree incline. Sole really has this 3hp motor humming at an incline. And you can tell the motors quality plates are a part of the 325 lb weight capacity.

My only real issue with the Sole f63 is that I wish the side rails were a bit longer. If you are using the 15 degree incline at higher speeds. Longer safety bars would be really nice. Besides that, there is a lot to love for the price. And the warranty especially adds a lot of value when comparing the two brands.

Below are pics of the NordicTrack EXP 7i vs Sole f63. There was no video provided for the 7i.

If you’re looking for a quality treadmill for a great price, then it makes a lot of sense to be comparing the NordicTrack EXP 7i vs Sole f63. Both are surprisingly roomy with plenty of power for the price tag. And overall the two treadmill’s specs are very close. With only a few details like hd screen and add incline separating the two. So which one should you buy?

To me it really comes down to tech vs function. And you have to ask yourself which is more important to you. If you are looking for a pure treadmill, something that just turns on and runs. Then I’m going with the Sole f63 and it’s incredible warranty. Overall it’s just a quality treadmill for an incredible price.

Now the one caveat to this is if you are looking for fitness classes. If that is the case, iFit is a great feature to have. Along with the 7” hd screen and the speed/incline that adjusts with the class, the NordicTrack Exp 7i is a great starter treadmill in way to get into the NordicTrack family without breaking the bank.