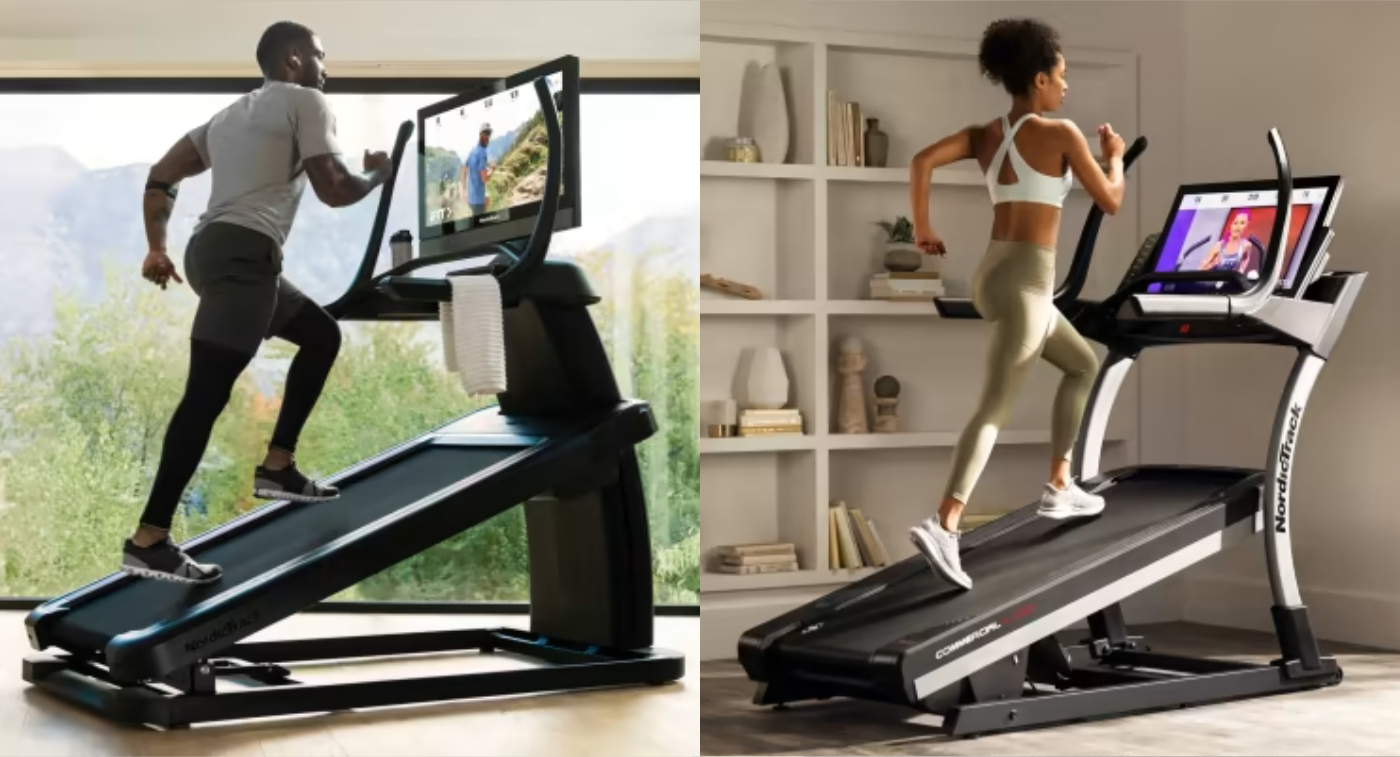 If you’re looking for a high end treadmill that has all of the latest bells and whistles, then today we have you covered. With the Nordictrack Elite Treadmill vs x32i we are reviewing two of the most feature rich treadmills on the market. But for all of their similar features, these are two very different treadmills. Each designed with a different purpose and providing its own unique advantages and disadvantages over the other. So below we’ll break down the two high end treadmills. Comparing key differences, specs, and images of both.

Both treadmills have the same 300 lb user weight limit. While the Elite is the heavier of the two by almost 60 lbs, weighing 520 lbs overall.

To pull the bigger tread, the x32i comes with a 4.25 chp (continuous horsepower). While the elite features a 3.6 chp motor.

The NordicTrack x32i offers a -6% decline option. While the Elite only offers a -5% decline running option.

The NordicTrack Elite Treadmill comes with dual motors for incline and decline. And a unique center single pillar design.

Both offer up to a 32 inch display screen. Running an android operating system.

The NordicTrack Elite Treadmill’s screen turns and pivots to be used with off treadmill classes. While the x32i’s screen does not.

They both also offer Auto Adjustment and quick One Touch controls for classes. And can change your speed and incline when taking a class on a specific course.

When comparing the Nordictrack Elite Treadmill vs x32i there is a lot to love about both. One is the brand’s highest end treadmill. Designed to excel in performance while providing all of the features you could want for daily running and fitness classes. While the other is regarded as the premier incline trainer in the industry. Bringing the closest thing to mountain training in your home that you’re going to find. Below I’ll break down each treadmill in more detail to help you get a better understanding of the features of each.

On first impressions the NordicTrack Elite treadmill is that it’s an impressive machine. Both in looks and size. This is a large treadmill weighing 520 lbs. So you are going to want to make sure wherever you set it up is where you want it. The look of the treadmill is high end from top to bottom. From its flush looking single pillar design topped with a massive touch screen. To the massive handles providing the perfect grip for steep inclines and emulating sled pushes.

When running on the NordicTrack Elite treadmill it can be easy to get caught up in all the bells and whistles. But the basic running experience itself is a joy. The deck is the perfect balance of cushioned and firm. And the dual motors for incline and decline have you flying through hills like you would out on the trails. And that 40% incline… if you know you know. The large touch screen is great for fitness classes and the swivel design is sure to be a huge selling feature for a lot of people. But all that technology can take a bit to get used to. And may not be right for everyone.

It’s hard to argue that the NordicTrack Elite treadmill is an elegant balance of form and function. The motor flies through the inclines and the deck is one of the best in the industry. And that marvelously large screen is perfect for helping kill time while running all those miles. I really don’t have much I can say negatively about the NordicTrack Elite, but there are a couple things that stood out. One, the treadmill is really heavy at over 500 lbs while only having a 300 lb weight capacity. And two, the amount of technology may overwhelm some people who just want to get on and run. But otherwise, this thing is a winner.

Getting to test out the NordicTrack x32i was a treat since it’s a model I’ve been hearing a lot about for a while now. This is the true original incline trainer, offering options up to a 40% incline and 6% decline. At first sight the x32i is a large treadmill. Although not as large as the Elite, the x32i offers a 22 x 65 inch tread running area. This is 5 inches longer than the NordicTrack Elite treadmill and can make a big difference when running at a steep incline. Topping off the unit is a huge 32 inch touch screen display. Making it perfect for watching netflix or taking an iFit class.

Stepping onto the NordicTrack x32i you really feel the added length of the tread area. The extra few inches gives it a more sturdy and “commercial” quality feel. Getting running and the deck is one of the best I’ve run on. The combination of cushions and response make for a joy to run on. And the motor just flies through the hills effortlessly as fast as you could want at the highest inclined offered on the market. A 40% grade is no joke. The display is bright and makes taking running classes feel immersive. But it is a bit awkward for any classes that don’t involve the treadmill.

Overall the NordicTrack x32i is a beast of a treadmill. And does almost everything you could want. Adding steep inclines, decline, and sled pushing options will take any runner’s game to the next level. Especially during the cold and wet months when hitting the mountains for vert is tough. My only real complaint about the x32i is that the screen is fixed, so using it for classes (which a lot of people like to use) just isn’t as smooth as it could be. Besides that, this is one the best treadmills I’ve ever tested.

Below is an image comparison of the Nordictrack Elite Treadmill vs x32i.

When looking at the Nordictrack Elite Treadmill vs x32i, you are comparing two of the most high end home treadmills you can find. Both are feature rich. Offering runners huge display options, inline grades up to 40%, decline running, and strong motors to pull you through your workouts. And the decks… two of the most responsive tread decks you will ever run on. Giving you an impressive balance of cushion while providing great rebound. But which one should you get?

If you’re lucky enough to be choosing between these two treadmills then you are truly in a win-win situation. Both are incredible treadmills. But if we are splitting hairs there is one reason I would choose one over the other. And it comes down to what you are going to be using the treadmill for more.

For people looking for a treadmill and fitness class machine. Something looks like the highest end treadmill on the market. The NordicTrack Elite treadmill is probably the better choice. Offering almost all of the same performance, an adjustable screen, and a look that would fit into even the most trendy NY condo. It’s built to impress.

But if you’re a pure runner and look for a machine to pound out some crazy incline miles. Then the x32i would be a really good choice. It’s a running machine through and through. Has a stronger motor, noticeably more running room, and is more stable with a higher incline.