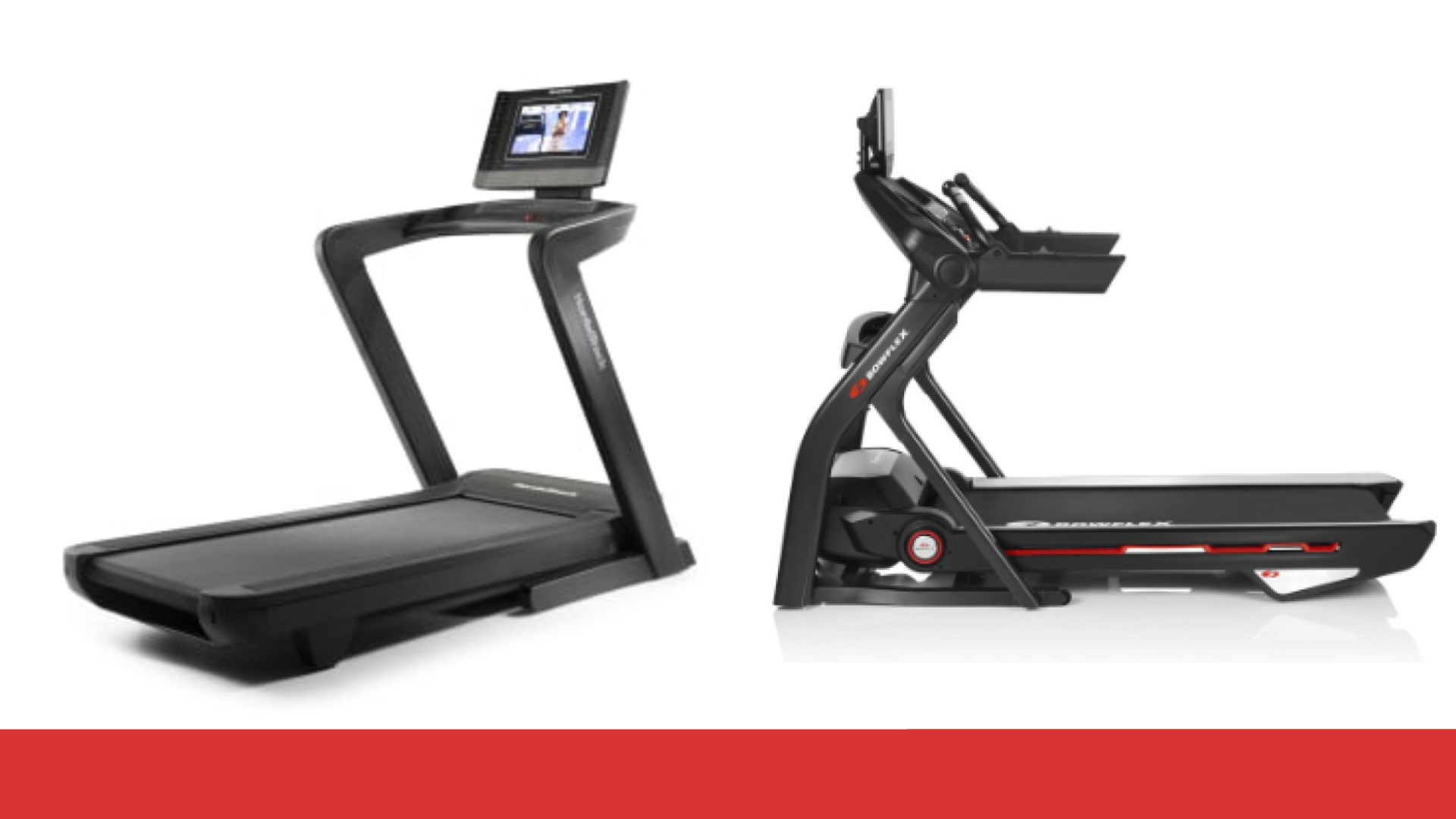 Today we’ll be looking at two treadmills that come with all the features most people would need and fall into the same price point. Breaking down the Nordictrack Commercial 1750 vs Bowflex Treadmill 10.

NordicTrack is one of the most trusted brands in home fitness. With their treadmills being some of the highest rated on the market. Then there is the Bowflex. A brand not known for treadmills that has built a  feature rich machine, featuring a great price and one of the warranties from any treadmill maker.

There is a lot to love about both of these treadmills. And there are a lot of updates to the 2022 models. Let’s get to the breakdown.

When it comes to recognizable names in the fitness industry, both of these brands have it. With NordicTrack being founded in 1976 and Bowflex 10 years later in 1986. Both have been around a long time. And while neither brand started out specializing in treadmills, they have each become giants in the fitness industry producing a variety of fitness machines.

As pointed out in the quick comparison above. These two treadmills have a lot in common. But with enough differences that each has its specific advantages. Below is a more in depth breakdown of the NordicTrack Commercial 1750 vs Bowflex Treadmill 10.

Looking at the new 2022 NordicTrack Commercial 1750, it’s a sleek looking treadmill. The 14” HD touchscreen is huge. And the new feature allowing it to be tilted and tuned, so it can be used for workouts off the treadmill is a game changer. There are button controls located below the touch screen, just above the front handle for use while running. Although I really wish they would have extended the side guards a bit. There is not a lot of room to grab once you get going. Especially when running at an incline.It would also be nice to see it fold for smaller storage.

Running on the Commercial 1750 is a joy. The cushioning on the tread is standard NordicTrack and incredibly comfortable to run on. And with a 3.5 CHP engine the treadmill has no problem pushing, even at the 15% incline. There is also a -3% decline option that is great for downhill work. The treadmill also integrates with the iFit app for interactive workouts. Allowing you to import routes from all of the world.

Overall, the new Commercial 1750 is a winner. There is no question they have packed a ton into the treadmill while keeping it at a dub $2,000 price point. Being a new model we don’t know how well the electronics will hold up. And they are only covered for 1 year. So that’s also something to take into account.

By comparison, when you first see the Bowflex Treadmill 10 it feels a bit clunky. Not in a bad way. It’s just a little bit larger in footprint and you can tell they have packed a lot of features into this machine. Minus the “sleek” design that comes with the brand new 2022 design of the NordicTrack. It’s also being sold at a bit lower price point and has the ability to fold up. Which I’m sure played a part in the larger design. This larger design also comes with a 400lb weight capacity. 100lbs heavier than the NordicTrack. And has -2% more decline, with -5% total available.

Feature wise the Treadmill 10 has everything you could want. The 10” HD touchscreen raises and tilts. There is room for your tablet and two water bottle holders. Running on the Bowflex feels great. The larger size makes for a roomy running space and the tread seems to have a good amount of cushion. And I love the ability to run at a good decline. One of the things that most runners really need to work on.

For me, the motor felt good even at the 13% incline. But Bowflex doesn’t list the motors CHP which does give me a bit of pause. Considering it has 400lb capacity. I’m a big fan of having heavier users walk at an incline instead of running. Which can put a lot of strain in the motor. But they have a 15 year warranty on the motor which is one of the longest in the industry. Beyond that, this is a solid treadmill. And with the recent price drop for 2022 it may be one of the best bang for your buck treadmills on the market.

Below are images of the NordicTrack Commercial 1750 vs Bowflex Treadmill 10 for you to compare. They haven’t released any videos for the 2022 NordicTrack, but I’ll post it once they do.

Looking at the Nordictrack Commercial 1750 vs Bowflex Treadmill 10, it’s easy to understand why a lot of people end up deciding between these two models. Both are feature rich and priced well compared to their competitors. And because they are so close in features and performance, to me it really comes down to aesthetic and design.

The new 2022 Nordictrack Commercial 1750 is a sleek looking machine that will stand out in your workout area. It is incredibly technology rich and with the 14 inch HD swivel screen, it’s designed for your off bike workout too. It’s everything you get from the Bowflex for just a couple hundred more. So for my needs I’m going with the NordicTrack.

Now there are a couple of reasons I would look at the Bowflex. If you are limited on space, the folding design seems to be a little more compact. It also has a 100lb higher weight capacity. So if you are looking for something to get started on your weight loss journey that can handle more weight. The Bowflex is a great choice at a lower price.