How to Disassemble a Proform Pro 5000 Treadmill for Moving 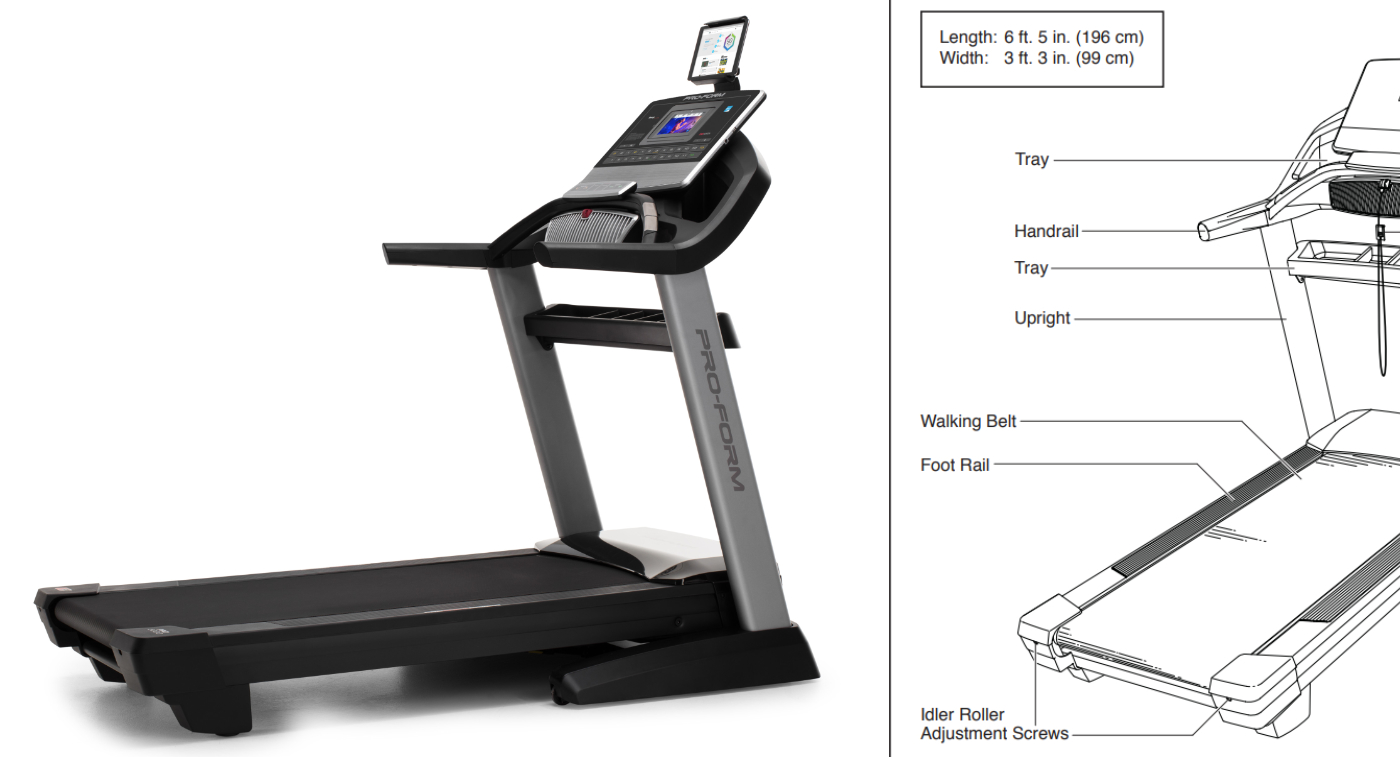 Moving a treadmill is never easy. But with the following instructions on how to disassemble a Proform Pro 5000 treadmill. It doesn’t have to be hard. What I’ve done is take the original manual and revered it. Including images from the book, you will see where all the screws and bolts are hidden. I’ve also included what tools are needed. And if you have any questions at all, let me know in the comments below!

How to Disassemble a Proform Pro 5000 Treadmill for Moving

* Do not use power tools.

Instructions – How to Disassemble a Proform Pro 5000 Treadmill

Before you start, make sure the treadmill is powered down and unplugged from the wall.

The Tablet holder (100) is held on by 4 screws (30) located on the backside of the treadmill console. You can use a screwdriver to remove these.

* For this step you are going to want to have someone help you hold the treadmill up. WHile you remove the latch bar.

To start, raise the treadmill to a folded stored position. The Storage Latch (56) is bolted in at both the top and bottom. As you can see in the images. Using a hex wrench remove the bottom (9 & 7) then top blots (9 & 4). Keep the treadmill lifted for the next step.

Next we are going to remove the Latch Crossbar (78). The Latch Bar is attached to the bottom of the frame with two washers and bolts. One on each side of the bar. Once you remove these two bolts the bar comes right off.

Now you can lower the treadmill back down.

The Tray (97) is attached to the Upright Crossbar (76). To remove the tray, you will need to remove four screws (24) holding in place. Two screws are located on each side of the tay near the frame rail. On the bottom site of the tray.

The left (94) and right (32) console Trays are held in place by three screws each. Located on the backside of the console. You can use a screwdriver to remove the six total screws (24) and lift out the trays.

On the bottom side of both the left (75) and right (74) handrail, there is a cover that comes off. Each is held on by two screws. Four screws in total (24). Remove these and set them someplace safe.

To remove the top left (73) and right (74) you will need to unscrew three screws on each side. Six screws (24) in total. Once you unscrew the 6 screws just lift off the two covers and place along with the bottom covers someplace safe.

The Pulse Crossbar (80) runs across the front bottom of the console. There are two screws holding each side in place. And we are going to remove these in preparation for removing the console. First remove the bottom screws (99) and washers (77) on each side. Then remove the top screws (6) from the top of each side.

If you or your installer followed the directions, you properly fastened the power wire to the frame using a provided Wire Tie (102). If this is the case, you are going to cut this Wire Tie so you can pull up the wire connector.

Once you have cut the wire tie as listed in the directions above. The next step is to lightly pull the cable connection from out of the rail. Then disconnect it.

Tip: Tape the end of that cable to the top of the rail and the other to the back of the console. We will do more with the one connected to the base in a minute.

* You may want to have someone help and hold the console while you unscrew it from the base.

Next we are going to remove the main console. So make sure you have somewhere to place this once you take it off. The Main Console Assembly (G) is held to the main handrails (74) by four bolts (29) and washers (8). Two on each side running through the back of each hand rails. Again, be careful taking this off. Once you start unscrewing the console assembly it can become loose and fall.

Both the left and right handrail bar is being held in by two bolts (2) with washers (8). Using the hex wrench, remove the four total screws (two each side), and then rails will come off. Make sure not to lose these bars.

The left (89) and right (90) upright covers are located at the base of the treadmill covering the bottom supports. They are snapped into place. So to remove them you will have to gently pull down and away on both the front and back. Be careful. Once unsnapped just pull it up and off the support rail (E).

* After this next step we are going to be running the control wire though the frame rail. To make it easier to set up, I recommend attaching a long string to the console wire before pulling it out. And after you pull it through, keep one side of the string taped to each end of the side rail. This way you can pull the console wire through easily when setting it back up.

Important: There is a ground wire attached to the right upright. Do not pull it away from the base unit until the ground wire is unscrewed.

Each Upright is held on by four bolts (20 & 23) and washers (25). You will need a wrench to remove these bolts. Remember, the console wire runs down the right upright. So be careful when removing this side. Use the tip above for an easier time running the console cable when you reinstall the treadmill.

Use a screwdriver to remove the one screw (13). And then pop out the ground cable connection from the upright.

How to Disassemble a Sole F85 Treadmill for Moving
January 8, 2023