How to Disassemble a Proform 995 Treadmill for Moving 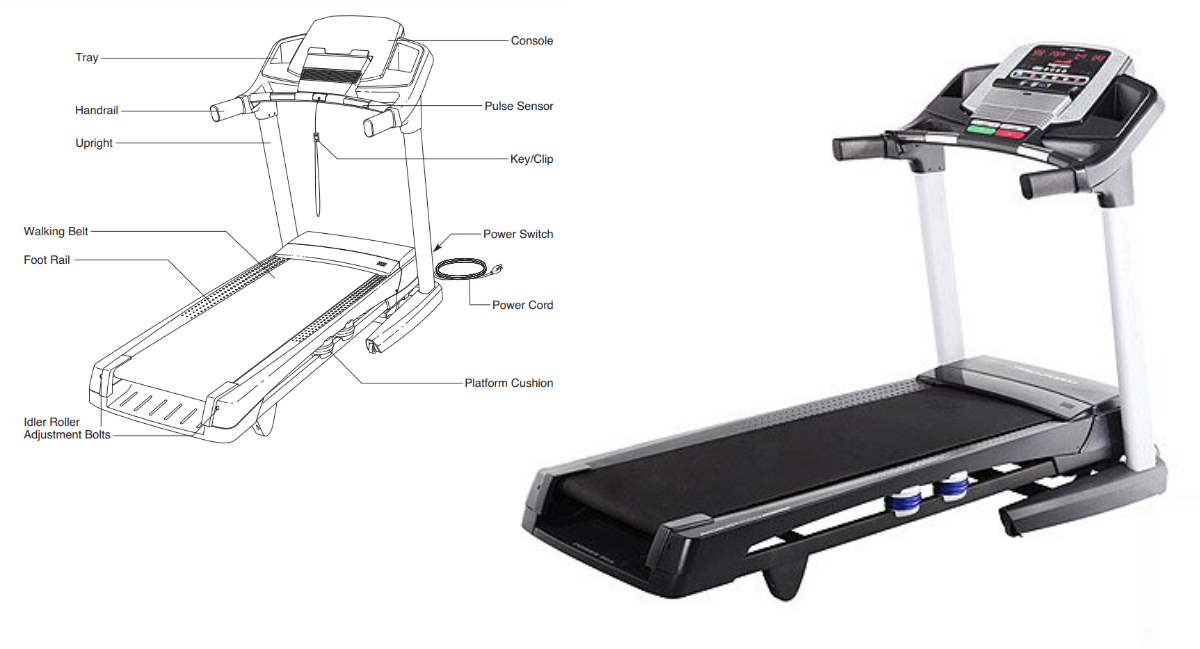 Moving or disassembling a treadmill is never easy. But have no fear, I’ve got you covered with a quick and easy guide to how to disassemble a Proform 995 Treadmill for moving. Below I’ve broken down the assembly instructions in reverse and include images to make it as easy as possible. If you have any questions or would like instructions for another treadmill model, let me know in the comment section below!

How to Disassemble a Proform 995 Treadmill for Moving

Step 1. Remove the Rear Feet From the Frame

First lift the treadmill to the upright / folded position. Then using a screwdriver remove the four screws(2), two on each side, and remove the two Rear Feet (57) from the frame (56)

* You may want to have someone help hold the treadmill up for this next step.

Lift the treadmill deck so that it is in the upright / folded position. From here you are going to remove the Storage Latch Bar (53) by removing the nut and bolt that connect the top (12, 6) and bottom (12, 3) of the treadmill’s frame.

To remove the Left and Right Console Treys (108,107), you will need to remove four screws (1) from the backside of the main control console. Then lift the treys out.

On each handrail there is a cover connecting to the Console Assembly. You can remove both of these by removing one screw (1) from each side and sliding off the left (85) and right (86) handrail covers.

The Left (82) and Right (83) base covers snap into place so you want to be careful when taking them off. To get them off you will need to pull out and then lift from the bottom of the base covers. So “un snap” them from the base.

To remove the Console Assembly, you will need to remove 10 total screws from the backside of the console. This includes six half inch screws (1) and four bolts (36) along with the accompanying washers (35).

Be careful when removing the console assembly not to pull too far and break the console wire. Only pull it off the rails a few inches exposing the console wire connection. From here disconnect the cable and place the Console Assembly someplace safe. Wrapping it in a  blanket for protection is a good idea.

To remove the crossbar, unscrew the two flat head screws (112) and the screws (9) and washers (35) connecting the crossbar to the two handrails.

* The console wire runs through the left hand rail, so be careful when removing it.

Step 10. Slide Off the Left and Right Base Covers.

Simply slide off the left and right base covers. And put them somewhere so they won’t get broken.

* Remember the Console Wire runs down the left upright, so be careful when removing it not to pull the wire.

Both the left and right uprights are held in place by four bolts (eight total). Two bolts (7) on top and two bolts (8) and washers (13) on the sides.

To remove the Console Wire, carefully run it through the left upright.

Step 13. Disconnect the Ground Wire and Run Through Base

First unscrew the base wire (10) from the base (110). Then run the console cable through the hole in the frame for safe moving.

To remove the wheels, remove the two screws (2) holding each wheel in place to the frame (94).

If you have any questions on how to disassemble a Proform 995 Treadmill for moving, let me know in the comments below.

How to Disassemble the Nordictrack t7 SI Treadmill for Moving
June 29, 2022

How to Disassemble a Nordictrack x9i Treadmill for Moving
May 13, 2022