Brooks Sports Inc (or Brooks Running) have been making shoes in the USA since 1918. And have since become one of the most trusted brands in running. Their lineup features a variety of options, and today we’ll be comparing the Brooks Dyad vs Ghost. Two shoes that compare similarly based on Brooks description, but are two very different shoes in person. Below we’ll cover the differences with spec, photos, and more. 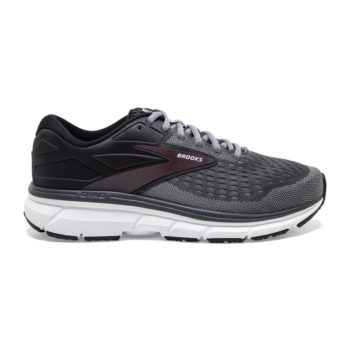 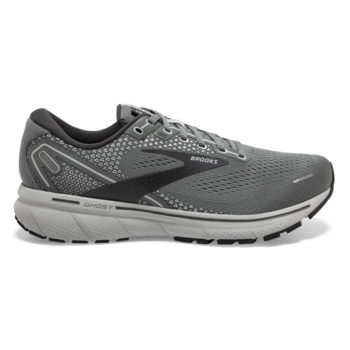 In 2017, Brooks represented 25% of the running shoes sold in the United States. So there is no question that the brand has a great reputation for running shoes. And with both of the tow models in their 10+ iteration, they have had some time to get them right. Each feeling as if they were designed with a purpose. So let’s get to the more in depth breakdown, comparing Brooks Dyad vs Ghost.

Putting on the Brook Dyad and there are a couple things you will notice. The first thing is that they are heavy. At 11.6oz these may be the heaviest “running” shoes in the brooks lineup. And that for their standard sizing, they are incredibly generous on space. Both in the midfoot and toe box. I’d guess to say they run ½ – ⅔ large. But this is intentional as Brooks says they are supposed to be roomy. This is also meant to help accommodate the addition of insoles / orthotics.

The arch in the Dyads is high and supportive, perfect for people with a high arch. If you have a low arch you may find them a little rigid. You will also notice this arch support while running. While Brooks says these are a neutral running shoe, they do provide more inward roll support than most neutral running shoes. And would be good for runners with fallen / collapsed arches or that are flatfooted.

All notes aside, the Dyads are really comfortable shoes. Just walking in them I could tell that there was a lot of cushion in the right places. They don’t feel fast, they feel plush. The added arch support transfers to the ground and they feel stable for how tall and plush they are. Overall they were very comfortable to run in but I can’t say there was anything that stood out to me performance wise. To me they worked as runners but shined for walking and as recovery shoes. I could see these being great if you are suffering from plantar fasciitis. Or any other food conditions.

While not a “lightweight” runner, comparatively the Brooks Ghost does feel a bit lighter on the feet. And noticeably more narrow throughout the shoe. Including the midfoot and toe box.  I’d say they either run true to size or even a little narrow on the feet. So if you have wider feet you’re going to want to probably size up.

The Ghost’s arch support is mild but there. I have a low to medium arch and I found it to be very comfortable. But if you have a high arch or need extra support you may want to look at the other options . The cushion in the Ghost is just enough to be considered a comfortable ride. Without being too heavy. The shoes feel good on the feet, even just for standing.

Now the Ghosts feel much more like a runner than the Dyad does on the feet. The brand doesn’t list the spring or curvature, but they just feel like they want to cruise at a bit quicker pace once you start running. And this is where the Ghost shone for me. Logging bigger miles for a training run felt like a breeze and wouldn’t hesitate to use these for a half or full marathon distance. Where comfort, cushion, and pace matter.

Looking at the Brooks Dyad vs Ghost you can see the added cushion, in the added black bead around the upper sole of the Dyad. 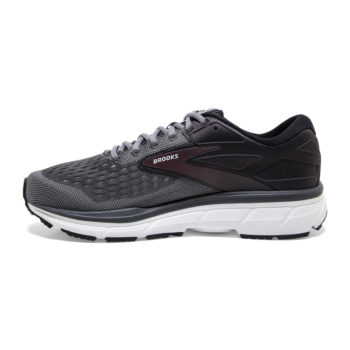 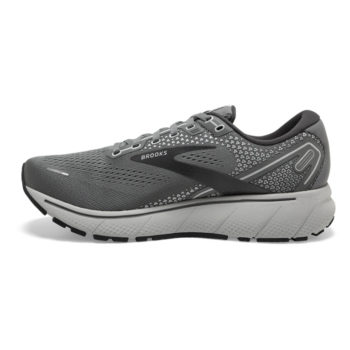 From above you can really see the difference of the two shoes in width. The Ghost is much more narrow from the heal forward. But especially in the mid shoe. 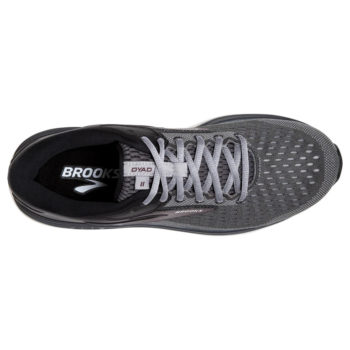 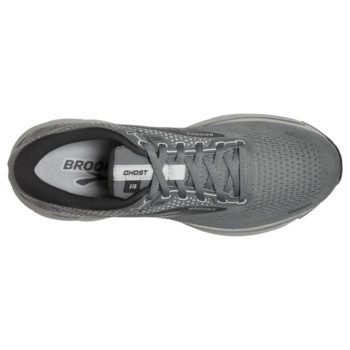 These two shoes have very different soles. Again from the bottom you can really see the difference between the two shoes in width. 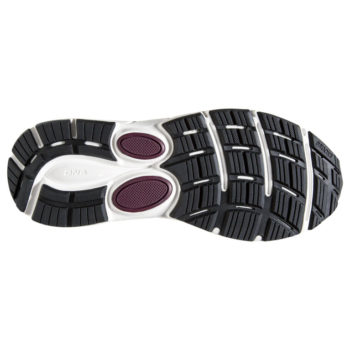 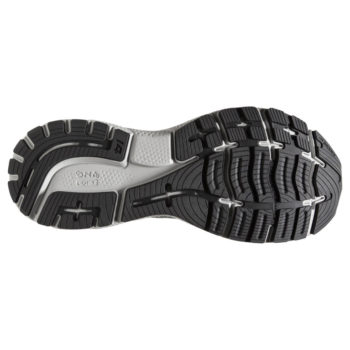 Brooks makes a lot of great running shoes. And if you’re looking for cushion, I can see why you would look at the Brooks Dyad vs Ghost. The Dyad is a max cushioned runner that is just as comfortable for daily wear. While the Ghosts provide just enough cushion for longer runs while still managing to feel quick. So which is the right running shoe for you?

Which road running shoe to buy?

For my money if I’m looking for a daily runner to log a good amount of miles and something that I can wear at my next half marathon. Then I’m going with Brook Ghosts. They are more of a pure running shoe first, with the right amount of added cushion. And are going to perform more like Brooks’ faster runners.

Now, if you are a brand new runner, walker, someone with collapsed arches, plantar fasciitis, other foot issues, or are looking for a shoe to stand in. Then I would really consider the Dyad. I feel like they are designed to provide comfort and support first, while being a runner second. And this is great for certain uses.