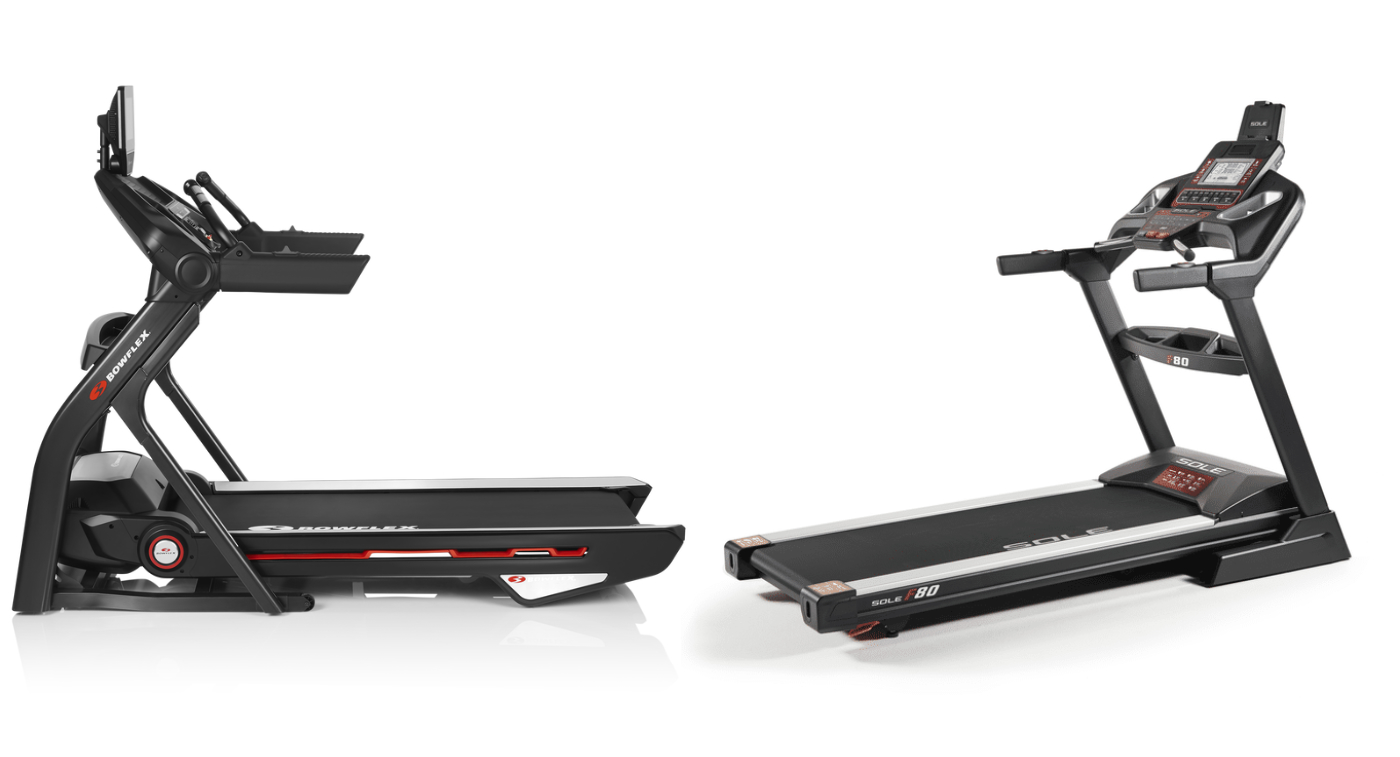 Today we’ll be looking at two feature rich treadmills that don’t come with an outrageous price tag. Comparing the Bowflex Treadmill 10 vs Sole f80. One is large machine with all of the features you could want for the price. While the other saves some space, has won multiple awards, and offers the best warranty in the industry. And with both sharing a very similar price points so it’s easy to understand why a lot of people end up comparing the two. Below I’ll break down the key differences, specs, and offer and in depth review for both. Let’s get to it!

Both Bowflex and Sole are two of the more recognizable names in the treadmill industry. With each offering well equipped treadmills at a consumer friendly price. And both offer great warranties on their products. There is a lot of reasons to be interested in both of thee brands and in particular these models. So below we’ll go into a more in depth review of the Bowflex Treadmill 10 vs Sole f80. To help you make the right decision when buying a treadmill.

My first impression of the Bowflex Treadmill 10 was that it is a large treadmil. Like the size of a commercial gym treadmill large. But thankfully it fold up to save space. The second thing I noticed was the large, 10 inch LCD touch screen. Offering a great experience for taking online fitness classes while on the treadmill. Or for watching a movie or TV show while running. And it’s this LCD that will be your hub for controlling the console. Which features very minimal buttons and options actually on the machine.

Running on the Bowflex Treadmill 10 there is a lot to love. First the treadmill offers a -5% decline running option, which is an awesome feature. Next is the soft deck and incredibly stable design. Because of it’s large base size, the Bowflex is really stable even when running at high incline. This will also make it more stable for heavier runners. A great feature since the treadmill has a 400lb weigh capacity.

There are a few downsides to the Tredmill 10 in my opinion. FIrst being one fo the features I like, the size. If you have limited space, this treadmill may not be my first choice. Second would be the opperting system built through the 10 inch LCD. I had some issues with the interface. BUt do feel this is something they will improve with software updates.

The Sole F80 is a good sized treadmill. Larger than most starter home treadmill models but still noticeably smaller than the Bowflex Treadmill 10. Even though it’s smaller, the F80 has the same 60 inch by 22 inch tread running areas. The other noticeable thing about this particular Sole model is the control panel. Which features a non touch screen and all the buttons you have used on a treadmill you would find at the gym. What it lacks in sophistication the controls make up for ease of use.

Running on the Sole F80 is surprisingly soft and quiet. The 3.5hp motor has plenty of strength to run even at a high incline. But it should be noted that the Sole does not have a decline running option like the Bowflex. This is one of the biggest differences between the two treadmills. Besides that the two have very similar stats. But I would say that I feel the deck quality on the Sole is a bit better.

One of the biggest advantages of the Sole F80 is the warranty offered by the brands. With lifetime coverage on the frame, motor, and deck. You won’t find a better warranty in the treadmill market.

Below are images and videos of the Bowflex Treadmill 10 vs Sole f80. Including shots of both treadmill consoles.

Looking at the Bowflex Treadmill 10 vs Sole f80, it’s easy to understand why so many people end up comparing these two. They are very close in price and both brands have an overall good reputation in the fitness industry. The Bowflex Treadmill 10 is a beast of a machine. It’s large and feature rich, offering runners a 10 inch touch LCD and the ability to run at a decline. While the Sole F80 is an upgraded version of Sole’s award winning F60. Including a large running area, strong & quiet motor, and an industry best warranty. But which treadmill should you buy?

Both of these are quality treadmills. But if I have the money and the space, then I’m going with the Bowflex Treadmill 10. The ability to run at a -5% decline is a huge bonus for the price. And the 10 inch color touch screen LCD is a major step up compared to the Sole. It’s even compatible with Netflix, Hulu and other streaming apps. Again, if you’re on a budget the Sole F80 is a great treadmill. The Bowflex, at only a few hundred dollars more just offers a too many features to pass up for the price.