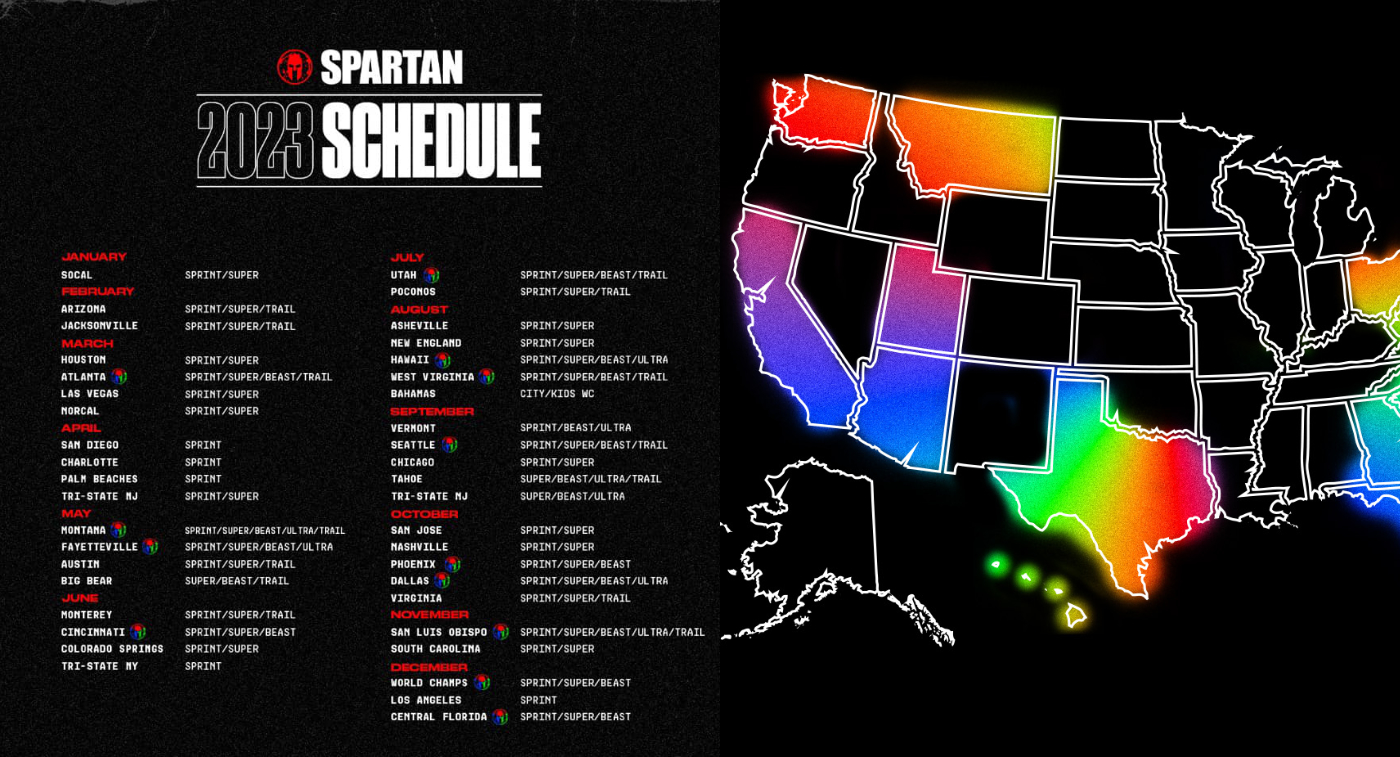 If you’re like me, you’re already looking ahead to the 2023 Spartan Race schedule and starting to put some dates on your calendar. And to better help you plan out your 2023 race season, I’ve put together a list of the latest schedule releases for Spartan Race. Including Trifecta weekends, Stadion events, National Series, Deka, Trail, and more! Some locations don’t have official dates and I’ll make sure to update this as soon as they are released.

Below are some quick links to help you jump to the event you’re looking for:

*All race dates are subject to change & cancelation. Make sure you know the cancelation policy.

Also make sure to check out the 2023 Spartan Race Medals and Finisher Shirts here!

If you want to race against the best, then the National Series is where the action is at. With an ongoing points ranking, and prizes for the top 3 overall throughout the season. And aside from world championships,tThese events tend to bring out some of the depeens fields in racing. So if you want to go head to head with the best check out the 2023 US Nation Series Schedule. (I’ll update as soon as the official schedule is released)

Challenge yourself against the best in your age group with Spartan’s Age Group race series. Consisting of five races across the country. You will be taking on one sprint 5k, two super 10ks, and two beast 21k races. With stops at some of Spartans most popular venues. Including West Virginia, Florida, and Big Bear.

One of the most unique experiences Spartan has to offer. Stadion events allow you to race in some of the coolest stadiums from some of your favorite sports teams. These races are also dry and mud less, making for a different and enjoyable type of race experience. So if the mud was your excuse for not racing, no more excuses! I’ll update this once the 2023 Stadion schedule is released. Below are the cities listed as getting dates.

Are you ready to take on the toughest weekend challenge in Spartan by completing a Sprint, Super, and Beast in the same weekend? While you don’ need to do them all in one weekend to earn your trifecta, you’re definitely a badass if you do. If you are in North America you will have you chance with 11 Trifecta weekend happening throughout the year. Check out the Trifecta schedule below.

Earn one of the most coveted race medals in Spartan Race while honoring the military and first responders. The Honor Series is intended to commemorate those who overcome obstacles everyday while serving and protecting their country and communities. The Honor series features unique medals that typically stand out compared to the typical race medals.

Growing in popularity every year, Spartan DekaFit allows racers to take the race indoors. Competing head to head in a functional fitness format. Opening up the options for winter and summer competitions and events to be held in big cities. Check out the 2023 Spartan Race Deka Fit schedule.

How to Prepare for a Spartan Race – The Day Before the Race
September 30, 2022

What is HIGHLANDER Adventure? Everything you Need to Know
August 17, 2022